December 12, 2016 -- We are so pleased to announce that three TPS teachers - Scott Wallace (7/8), Cindy Newland (4/5/6), and John Searcy (7/8), have received Lilly Foundation Teacher Creativity Fellowships for the summer of 2017. Click here to read about the Teacher Creativity Fellowship Program, and about our teachers' specific project proposals, which won them this prestigious award! Congratulations to all three of these visionary educators! 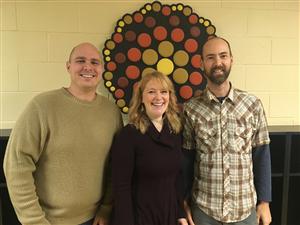 October 7, 2016 – Educators from The Project School and the Indiana University School of Education forged a unique partnership in 2015 that supported middle-school students over the course of a year-long, multidisciplinary design project. The project engaged students in a broad question: Can DIY aquaponics systems solve sustainability problems associated with the industrial food system at home or abroad?

The students and educators studied world food systems, and then designed and implemented aquaponic food gardens. Aquaponics is the marriage of aquaculture (raising fish) and hydroponics (the soil-less growing of plants) that grows fish and plants together in one integrated system. Middle School educators Scott Wallace and Tarrey Banks facilitated the project, in collaboration with Krista Glazewski, Christian McKay, and Mishael Sedas from the Indiana University School of Education.

“The unique partnership between in-service teachers and top-notch university researchers afforded us a broad thinking group of passionate educators who could gather resources and quickly adapt to the changing needs as the project progressed. We hope it is a model we will use again and can teach others to replicate in their own classrooms,” said Wallace.

The team is now sharing its success with other educators, both regionally and nationally. Banks, a PhD student in Sustainability Education at Prescott College and a teaching fellow at the Indiana University Creativity Lab, has published an article in the e-book, Shelburne Farms Sustainable Schools Food Project 2016. Wallace presented on the impact of utilizing makerspace and design in the classroom, at the summer 2016 “STEM Works!” conference in Columbus, Indiana, funded by the Department of Education Math Science Partnership. Wallace, Banks and McKay published an article on makerspace education and design in the peer-reviewed journal, “International Journal for Designs in Learning.” And the full collaborative team will now serve on a panel at the FabLearn conference at Stanford University October 14-16.

Cathy Diersing, The Project School’s Leader, emphasized that the aquaponics work exemplifies the school’s unique educational model. “This sustainability effort represents the core of what we hope to accomplish with students at all grade levels, utilizing project-based work to help them develop the will, skill and capacity to see themselves as contributors to the greater good throughout their lives. Real projects, that solve real problems, in real time are a cornerstone of our curriculum.”

October 3, 2016 -- The Project School is honored to have received the Old National Bank "Tools for Schools" competitive grant for a second year. This unrestricted grant was awarded to TPS after a regional voting competition. The school with the greatest number of votes in each of Old National Bank's 14 regions received $1000.

September 5, 2016 -- Scott Wallace and Tarrey Banks - the TPS Middle School Team - have co-authored a paper with Christian McKay, from Indiana University. Christian is a doctoral student in Information Sciences, and he has been partnering with Scott and Tarrey on the development and implementation of science and technology based year-long P3 curriculum. Their article describes the process and results.

The International Journal for Designs & Learning is a multidisciplinary, peer-reviewed online journal, dedicated to publishing descriptions of artifacts, environments and experiences created to promote and support learning in all contexts by designers in any field. The IJDL Library of Congress ISSN is 2159-449X.

The journal provides a venue for designers to share their knowledge-in-practice through rich representations of their designs and detailed discussion of decision-making. The aim of the journal is to support the production of high-quality precedent materials and to promote and demonstrate the value of doing so. Audiences for the journal include designers, teachers and students of design and scholars studying the practice of design.

This journal is a publication of the Association for Educational Communications and Technology.

It wouldn’t be hard, 8-year-old Brandon Keefe thought, to gather the books he and his friends owned and had already read, which were sitting undisturbed on bookshelves, and donate them to the children in need.

But it was hard for Zeke Fleissner-Kates, a fourth-grader at the Bloomington Project School, to fully understand that some children could live in a such a different world than his own — a world without books.

Keefe is the founder of BookEnds, a nonprofit organization that holds book drives to send new reading materials to students at schools, after-school organizations and other centers in Southern California that need them. His work has helped deliver more than 2 million books to hundreds of thousands of children.

BookEnds can’t send books to every child who has nothing to read. But Keefe, Zeke learned, is still a “starfish thrower.”

The students in Cindy Newland’s mixed third-, fourth- and fifth-grade classroom were introduced to the concept of human rights by way of the short tale of the starfish thrower. After a storm, a beach was covered with starfish that had washed ashore. A child began to throw them back into the ocean, one by one. When someone told the child that the effort could never make a difference because the child couldn’t throw back all the starfish, the child threw yet another and replied, “I made a difference to that one.”

“It’s impossible to fix all the problems in the world,” Zeke said. “But at least you help fix one.”

Over the academic year, Project School teachers have incorporated the theme of “struggle and progress” into their lessons. Newland’s students interpreted the schoolwide theme by learning more about the United Nations Convention on the Rights of the Child.

Students researched other young starfish throwers, and recently made art collages with photos and quotes from a child human rights champion.

“Kids have a voice, and they have the power to make really good choices,” Newland said. “They’re open to embracing people who are different from them.”

Some of the children that Project School students researched have become household names: Malala Yousafzai, Ryan White and Ruby Bridges. But the less well-known human rights advocates the students learned about do work that’s just as important.

“You don’t have to make a difference and immediately after that get famous,” said Kira DeFelice, a third-grader.

“If I made a difference, I would probably not want to be famous,” third-grader Ruth Bartlett said. “Doing something for the world and just doing it without being asked is good already.”

Zeke, Kira, Ruth and their classmates’ collages will be featured in a gallery titled “Struggle and Progress: Celebrating Child Heroes and Human Rights” in the Thomas T. Solley atrium of the Sidney and Lois Eskenazi Museum of Art through Sunday.

“When I saw my art was with all the other artwork, I felt very proud of us,” Ruth said.

Now, it’s Newland’s students’ turn to go out into the world and throw their own starfish. Some have already started. Kira and a friend ran a lemonade stand as a part of Lemonade Day, a nationwide program that took place in Bloomington Saturday.

One of the young difference-makers they studied was Alexandra Scott, who used lemonade stands to raise more than $1 million in donations for childhood cancer research before dying at age 8 from neuroblastoma.

Kira and her friend plan to donate some of the proceeds from their stand to Middle Way House, a Bloomington-based domestic violence and sexual assault shelter and resource center.

“If we can teach kids as children not to be prejudiced and to embrace everyone and to keep an open mind and to seek to understand, I think as they grow up it’ll make huge difference in the tone of the world,” Newland said.

“We are proud to be recognized by the Indiana Department of Education as a School of Promising Practice. We believe that all children deserve educational excellence that focuses on their hearts, minds and voices. We are honored to work on behalf of children and their families, making our community stronger through our efforts.”

Identified schools and organizations, such as The Project School, are student-centered and focus on positively impacting children through innovative programming and activities that provide a high-quality learning environment and experience. The Project School’s promising practices will be shared with educators across the state of Indiana as an example of best practices that are having a positive impact on Hoosier students.

Copyright © 2023 the project school. All rights reserved. Powered By Thrillshare